Danish house of bridal fashion LILLY has a big and very beautiful portfolio of brands, designed to complement each other and offer a full service to retailers.

Scandinavian LILLY has been at the forefront of the bridal wear market for 75 years. The story of its success dates back to 1946 when the company was founded by Lilly Hansen. "It was directly after the war and textiles were extremely scarce" explains Anne Kathrine Rantzau Ulrich, the company's CEO "So, at the time, it was extremely important that whoever you entrusted with the task of creating your bridal gown would be able to work miracles - and Lilly could make three meters look like twenty. Because of her attention to detail, the word of Lilly's designs and craft skills spread. And we are still known for theses qualities today. The company has it's own LILLY stores in Germany, Denmark and Sweden, as well as numerous retailers all over Europe.

The brand has successfully developed four fashion labels within the bridal market. LILLY, PASSIONS by LILLY, DIAMONDS by LILLY and purewhite by LILLY. Each collection is supplemented by a wide collection of matching accessories such as jewellery, veils, shoes, purses, jackets and headwear such as tiaras, curlies or floral hairpieces. Alongside the bridalwear LILLY also has an elegant line of Evening and Special Occasions dresses as well as adorable collections of flowergirl dresses, communion dresses and christeninggowns.

The talent behind the brands stunning collections is designer Eva-Dorthe Smith "She is a fountain of new ideas and is constantly drawing, sketching and creating new styles in our in-house production facilities in Denmark" says Anne Kathrine "She is also heavily involved in contact with our retailers as well as brides-to-be. This face-to-face interaction and constant flow of feedback ignites her creativity, which means new design ideas flow easily onto the drawings board."

In addition to being widely admired for the design and quality of its styles. LILLY is highly regarded for its first class customer relations. "We value direct contact with all our customers, and we enjoy visiting the stores and meeting first-hand." says Anne-Kathrine "We are always available to offer advice and inside knowledge to our retailers about which styles are performing best with the end-consumers. Having our own stores gives us an inside track on what consumers want and like best, and it means we have valuable information and first-hand experience to share. To support our retailers further, we have a B2B-online shop where orders can be placed out of office hours - unsurprisingly this has proved extremely popular. The flagship LILLY range features the largest selection and is very sought after, while PASSIONS by LILLY and purewhite by LILLY meet the needs of different retailers and different brides.

LILLY - is the core collection. The signature are classic gowns in elegant materials and pretty finishing touches of detail.

PASSIONS by LILLY - is a fashionable collection of bridalgowns in contemporary silhouettes and intricate details.

purewhite by LILLY - Pure. Elegant. Authetic. Clear cuts and perfect silhouettes in an aura of luxury.

DIAMONDS by LILLY - is a range of stylish dresses in shorter length, specifically designed for brides having a "far-and-away" destination wedding or a less traditional affair.

OTHER COLLECTIONS BY LILLY 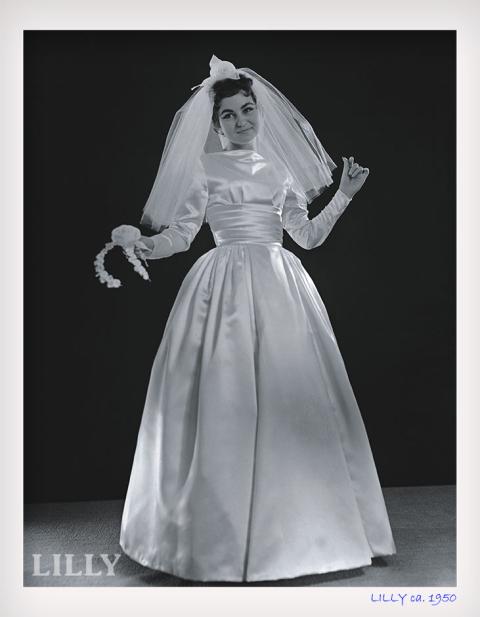 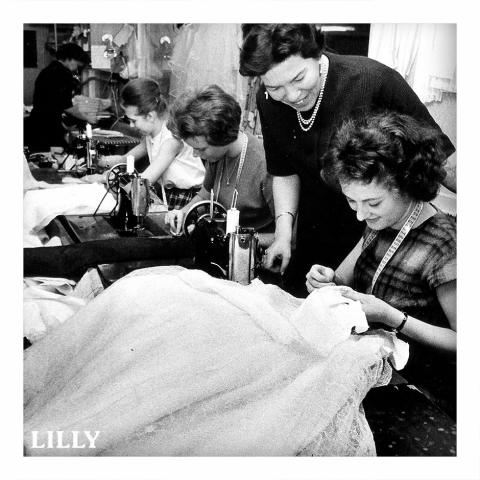 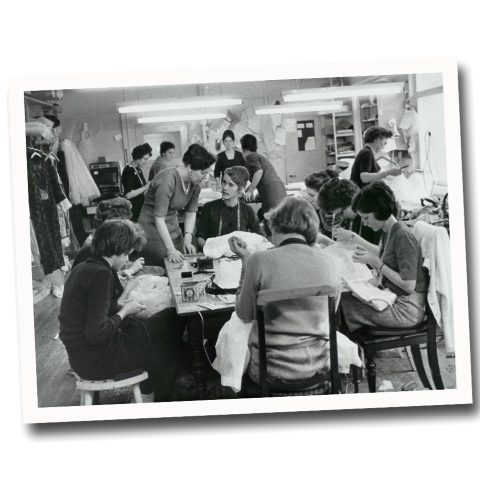 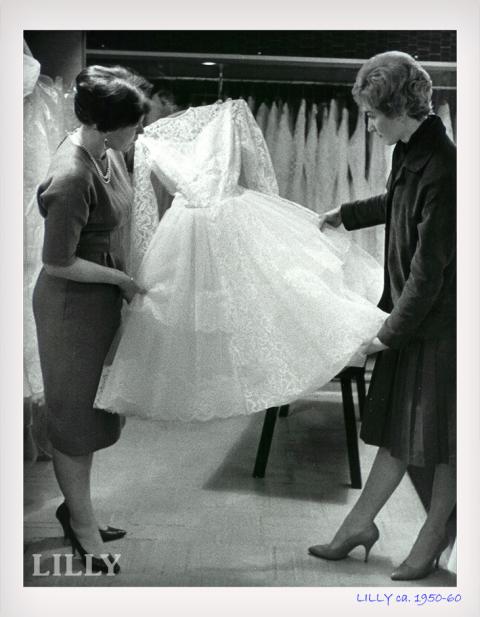 A SUCCESS STORY:
For more than 75 years the scandinavian brand "LILLY" has been creating inspirational bridalfashion - with a lot of love and know-how - for brides throughout Europe.

LILLY shops soon followed in alle the major cities of Denmark and in 1978 the first LILLY shop opened in Flensburg, Germany.

Today you can visit LILLY bridal shops in Denmark, Germany and Sweden, aswell as find the brand represented in renowned bridalstores throughout Europe.

Travel with LILLY through time:

Fashion trends and ideas in bridalfashion have changed over the decades. Only one thing is everlasting: the wedding dress must be fashionable and radiate WOW-feeling!

Regal dresses inspired by previous centuries: artfully draped waistlines and big draped skirts, combined with strapless corsages or halternecks. The romantic decorations of beaded sequence and pearls add glitter to each style. The dresses are fitted with backlace.

The height of the Boho-bridal trend of breezy dresses and crochet lace gowns in vintage nuances ranging from soft rose to dark ivory and blush. The tattoo-trend of sheer lace over a neutral colored tulle background is en vogue and paves the way for more daring silhouettes and deep-plunge necklines.